“The People are God” claims a new North Korean propaganda poster. And by “God” they certainly don’t mean in the Abrahamic or even the Buddhist sense.

The fact is, the people of North Korea know only one god – their dictator Kim Jong Un.

As part of a long-standing New Year’s tradition, each year North Korea rolls out a new series of propaganda slogans and posters that urge citizens to rally around Kim Jong Un and the “Workers’ Party of Korea,” the latter of which is somewhat of an oxymoron as there is only one “party” in Korea.

This year three new propaganda posters featuring three new guiding slogans and ideals for 2021 were released and shown during a mass rally in the Hermit Kingdom capital city of Pyongyang.

Clap or be shot!

Attendees to the rally got a preview of the three new posters and slogans, which will soon be distributed across the country and displayed in factories, public buildings, and streets nationwide.

The three new slogans unveiled this week which will “guide” the people of North Korea in 2021 are as follows:

Such wholesome and warm and fuzzy slogans, right?

North Korea is, after all, a brutal dictatorship. Their regime stays in power by crushing dissent (read: killing off critics) and by propagating bald-faced upside-down lies to its oppressed people about just how good they have it under their benevolent (read: murderous) leader, the sainted Kim Jong Un.

Don’t believe you’re lying eyes; this is the best of all worlds!

Kim Jong Un announced the new slogans during his annual speech at the North Korea Party Congress in the second week of January (which is only a “congress” in so much as it is a congregation of Kim Jong Un’s henchman who get together to hear how Kim plans to keep the deteriorating ruse of North Korea afloat for another year).

In unveiling the slogan, Kim Jong Un said he wanted the North Korean people to focus on these simple, brief phrases instead of “putting up some kind of flashy slogan this time around.”

All three slogans are, in fact, recycled from previous years. The North Koreans are either running out of ideas or they’re too busy killing their own people and robbing the treasury to come up with any new slogans.

According to Kim Jong Un, the slogan “the people are God” reflects the party’s aim “to serve the people.” Hard to do when you have your boot on their neck.

The other two slogans – “single-hearted unity” and “self-reliance” – refer to the “political requirements” of all North Koreans. Sounds like a fun place, right?

Taken together, they can be seen as a contradiction wherein one is told to submit to the dictatorship and fend for yourself. Essentially North Korea is the oppression of communism without any of the benefits.

Kim Jong Un and his lackeys are hoping – like, really, really, hoping – that the three slogans will help distract the North Korea people from the death and poverty around them which has only gotten worse during the COVID-19 pandemic, with increasingly desperate reports of starvation leaking from the tightly sealed-off country.

Signs indicate that it is possible North Korea is on the cusp of another “Arduous March,” or the “March of Suffering,” which was a period of mass starvation and economic crisis between 1994 and 1998 during which millions of North Koreans died from famine.

Meanwhile, at the un-reality of the January Workers’ Party rally, banners crowed brainwashed appeals such as “Long live Dear Comrade Kim Jong Un, the symbol of socialist Korea’s strength and the banner of never-ending victory!” while placards shouted “Our country first” and “Follow the Marshal to the end.” 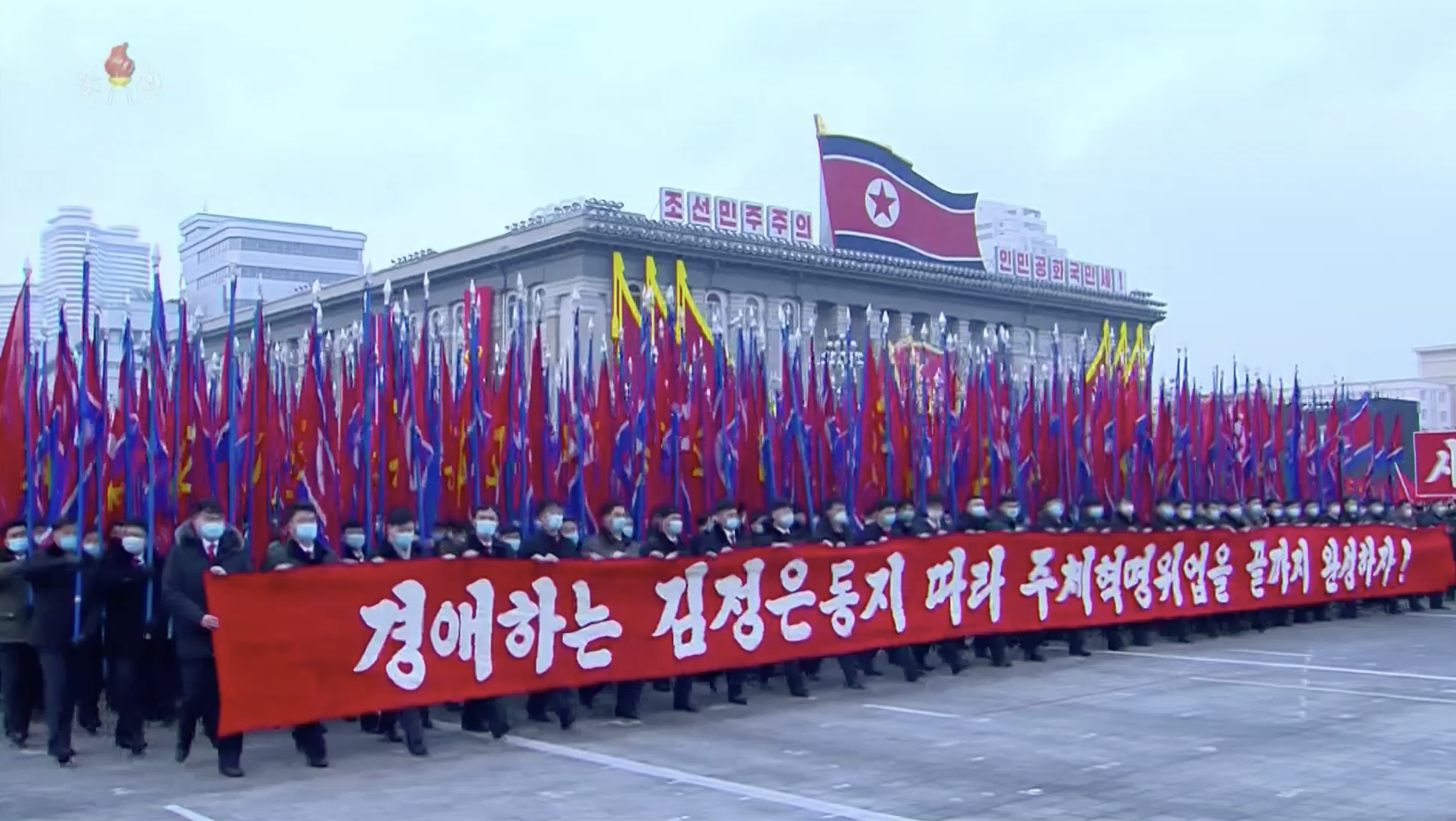 One banner featured the 2020 slogan of “Head-on breakthrough battle.” The English translation is clunky, but you get the idea. Need it be said, there there was no North Korean breakthrough in 2020. 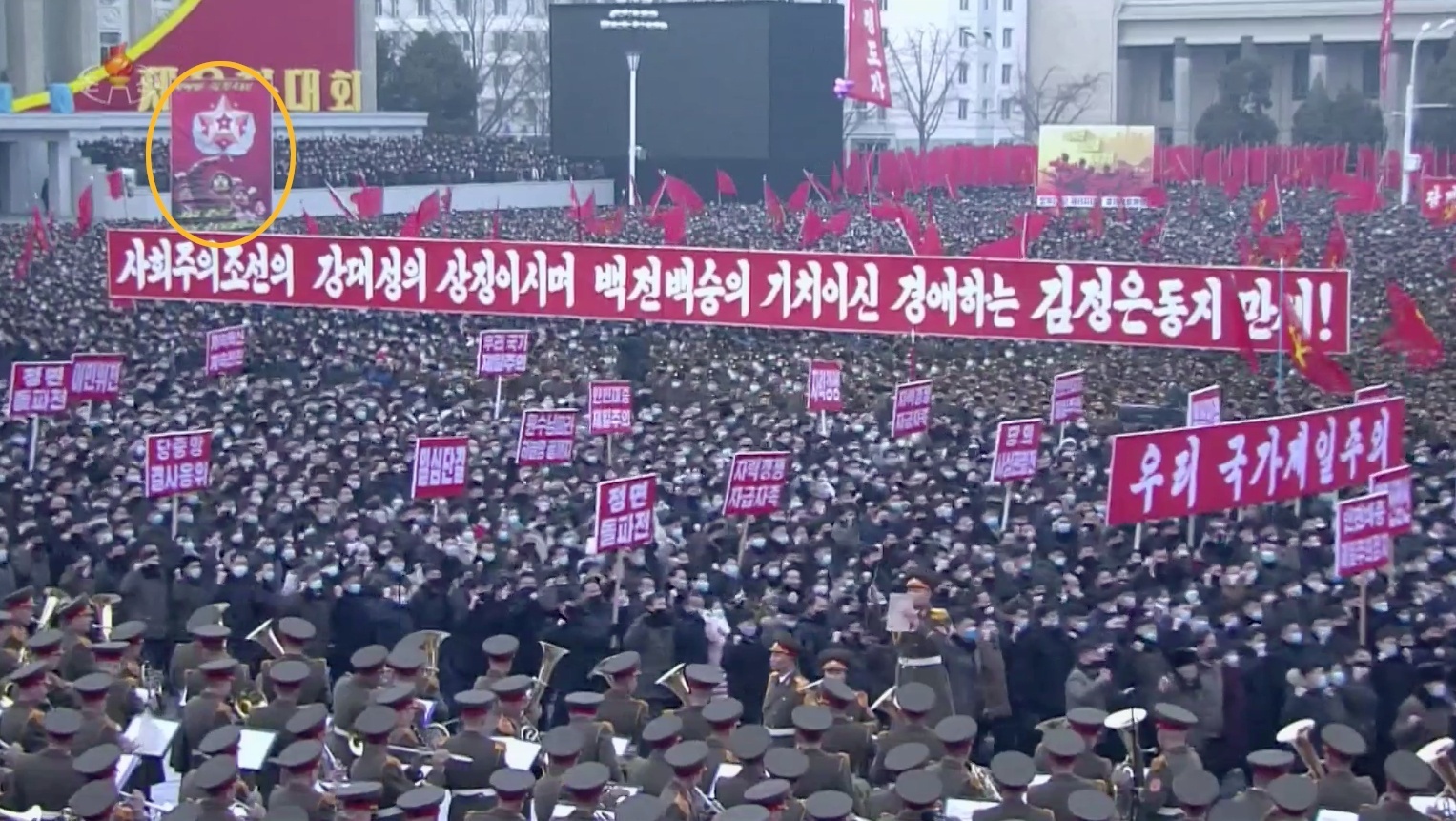 The cartoon figures that appear in the North Korean posters feature the stock classes of North Korean society: workers, intellectuals, soldiers, and farmers. Doctors are curiously missing, which can be viewed as the dictatorship’s attempt to direct attention from the pandemic. It’s also possible that North Korea has killed all of its doctors and doesn’t have any left to show.

The cartoon workers pictured on the North Korea propaganda posters exhort citizens to “focus all our energy on carrying out the five-year plan for national economic development!” North Korea had to have a cartoon say it because everyone else thinks it’s ridiculous.

“Move vigorously towards the new victory ahead,” shouts another poster. It’s safe to say that North Korea hasn’t done a lot of winning lately and there will be no victory ahead But that’s what propaganda is for – to try to convince you otherwise.

Don Jr. Goes After Teachers’ Unions While Rubbing Their Faces in His 2A Rights

Calm Down, Ivanka’s Not Running for Senate

Your free subscription includes news and specials sent by email in accordance with our trusted Privacy Policy.